Carlo and Oliver fell in love with Trouville decades ago as tourists themselves. So much so that they bought a condominium here. And in 2019, the hotel. In the meantime, the two (along with Brodie, of course) have long been part of the inventory of the bustling seaside resort stage: the tall German and the former dancer and choreographer from New York. They belong to the people who make up life here – the businessmen in the small antique stores, the restaurant owners, the merchants and vendors at the fish market in their thick rubber boots … the people who eat and store, live and work here …

So the two gentlemen from the Townhouse Trouville are known. People call them on the street a good day, wave friendly from the store or stop for a quick chat while the dogs are fighting at the stand. They are not only part of the city’s “hospitality” industry, but also of the vibrant arts and culture scene. And I benefit from that, too!

But first of all, today was of course Departure Sunday. And I cleaned the 6 according to all rules of the cleaning art (no, I just say nothing to the time account and rather claim that I take my job just very very seriously). Much more interesting is that I slipped into my role as a successful blogger (hihi) in the Yvette costume to talk to Stefan Konarske, who was at the Townhouse for an aperitif. 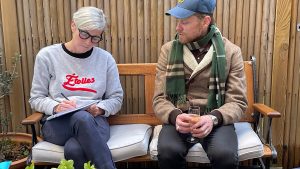 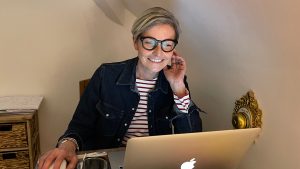 The actor from Northern Germany (you probably know him – like me – from the Dortmund Tatort) lives in Paris and was in Trouville for the weekend. Oliver and Stefan know each other from the Gala Spa Award in Baden-Baden. And their love of France, which they both share, keeps them in touch. I was particularly impressed that Stefan left his home country at the age of 17 to go to Paris. He says that his grandmother knew long before he did that he would become an actor. Sweet, isn’t it? We don’t know whether she also foresaw that today he co-produces films himself and will soon be seen in the amazon series “Luden” as “Micha, der Schöne” – but I assume so … I’ll definitely watch it and remember our nice little interview fondly: Merci, Stefan, et bonne chance!

One thing is for sure: Always something going on here!

February 14: Art instead of Valentine’s Day!

February 12: Off to the market!